‘Trees Collected from the wild’

Yamadori is a term used by the Japanese to describe trees collected from the wild.  However if you look into the subject further you will see that it also means more which is hard to put into words.  As with many words or terms in Japanese culture there is an unspoken meaning.  ‘Literati’ is another such word with many forms of interpretation.  The term Yamadori has a lot to do with the character and age of the tree.  To the Japanese, not every tree dug from the Mountainside is classed as Yamadori.  It has to show the battle of growing many years in its form, with its old cracked bark and its trunk twisted by the elements.  Such trees are not easy found and the title, Yamadori, is not given lightly.  However we people from the West, as usual, go by the basic interpretation and class all trees collected from the wild as Yamadori.  Some even class old trees collected from gardens as Yamadori. 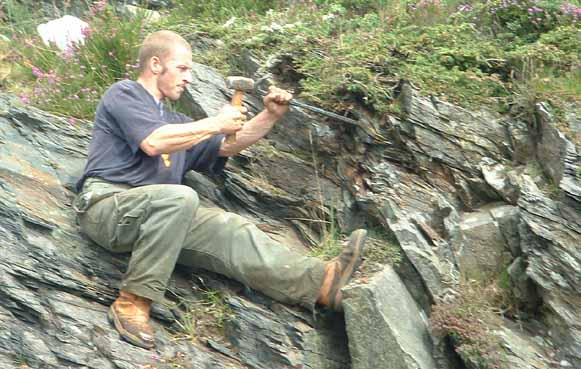 Why bother looking for such trees when you can go to a Garden Centre and buy a plant already potted and ready to style?  The reason is simple.  Look in the Bonsai books that adorn most enthusiasts shelves and you will see that all the top class Bonsai, with a very odd exception are Yamadori.  As you get further into the Art of Bonsai you want to improve the quality of your trees.  This can be done over a long time scale with Garden Centre material but most will keep a certain look which occurs when you work with like material all the time.  Yamadori give you age and character which man can never hope to achieve when styling a tree and will lift the quality of a collection.

Where do I find it?

Good quality trees are hard to find.  Most enthusiasts, after finding a good collecting site, tend to keep it under their hat.  Once word gets out trees you have been preparing to lift for years can disappear overnight, so you can understand the need for delaying the spreading of such information.  One top tree hunter from England tried to find out from various sources the best collecting sites in Scotland.  He got nowhere.  Sites are big secrets on the mainland.  Look for Daisy Slots if you are wanting to play the latest casino games. Undeterred he went to Scotland and after buying ordnance Survey Maps hired a Helicopter and within four hours had found three of the four best sites for collecting.  Marking them on the map he drove to them the next day and got permission to collect from two of the sites.  The moral of this story is that the trees are there for you to find.  I’m not saying that you should hire a Helicopter and fly around all day.  With a bit of common knowledge you can easily mark on a map where there should be a good collecting site and take a drive some day.  Bring a friend who is also into Bonsai and I guarantee you a good day out.  The best day I ever had in Bonsai was collecting trees from…….. a top secret location, hah!  Use a bit of common sense and look in harsh areas such as high mountains, Coastal areas, old quarries and especially where animals graze.  Sheep and Deer have been creating prospective Bonsai for hundreds of years, it would be a shame not to take advantage.  You may have to drive quite far to find trees like these.  Not everyone has them on their doorstep. 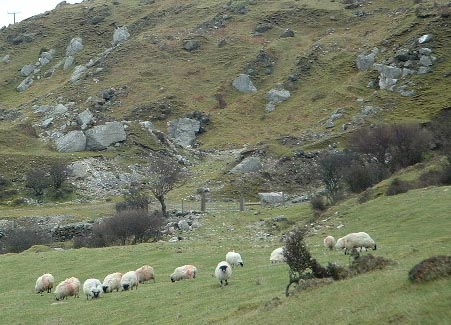 What do I look for?

When you find your trees look for the ones with old bark and nice trunk lines.  There is no point collecting ones with brush shaft trunks and smooth bark, these you can find in a garden centre.  Also find out if they can be collected. Some trees growing on rocky ground have roots which disappear under rock never to be seen again.  If you cannot collect it with reasonable chance of survival then leave it where it is for others to enjoy.  One American collector spotted what appeared to be a fantastic tree.  On clearing the rocks from around the base he found a trunk as straight as a brush shaft travelling for several feet before disappearing under a large rock.  He covered it back up to the way he found it and even pruned the foliage to look even better for the next enthusiast that came along.  Americans!!  The last and most important thing to look for is permission to collect.  Most land owners are that flabbergasted at what you want it for that they say yes and run to tell their wives about these ‘Bonzi hunters’.  This works to your advantage.

How do I collect it?

Before you lift the Tree, make sure you have all the tools you need. A spade, saw, crowbar, and long handled shears will all come in handy.  Also include bags to put the tree in and packing tape to wrap them up with.  Water to wet the roots will also be needed.  Start by digging a trench around the tree.  Try to get as many fine roots as you can.  This may mean that you need to take a lot of soil with the tree. It’s better to do this and have the tree survive.  Once you get the trench dug out, dig under the rootball cutting the tap roots.  Try not to shake the tree back and forth as this rips and tears the roots and will not help the tree.  When you get it out, wrap the roots in moss if you have it to hand and then wet it.  Now wrap the roots in a plastic bag which will hold in the moisture.  Use the tape to wrap the  bag tight so that the roots can’t move.  Cut off any excess growth from the top but try to keep all your design options open.  If in doubt then leave it on.  Also, mist the foliage to prevent it drying out. 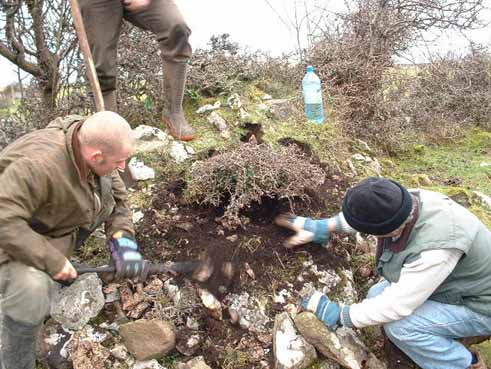 This is the most important part of collecting a tree. You should have your potting mix ready beforehand so that when you get home you can pot it straight away. Make the mix very free draining using a lot of grit.  Some people wash out the roots with a hose, others don’t.  This is really personal preference.  Cut back any ripped roots that will only rot later.  Seal all cuts top and bottom to prevent moisture loss.  Try to leave as many fine feeder roots as possible.  Pot the tree up ensuring that there are no air pockets in the soil.  Water well with a Vitamin B1 solution if you have it. Do not water again until the soil is drying out, but mist the foliage of the tree three or four times a day.  Place it in a shaded area out of the wind.  Do not feed it for two years.  Trust me this is important.  There is enough in the soil to keep it going.  It has come from a harsh area and will not be used to an abundance of fertiliser.  The last point is the most important.  Do not try to style the tree for at least two years.  If you start work too soon you will only stress the tree as it is finding its feet.  After all the trouble you have went too, it would be a shame to kill it on the last step of the aftercare.

When you have found your collecting site, got permission to lift it, dug it out, potted it up, given it TLC for two years you can then style it.  If you have collected good enough material then it is well worth it.  If this all sounds like too much work, then stick to old garden trees or find someone who is willing to sell Yamadori.  But after all he has been through to collect it, expect to pay for it! 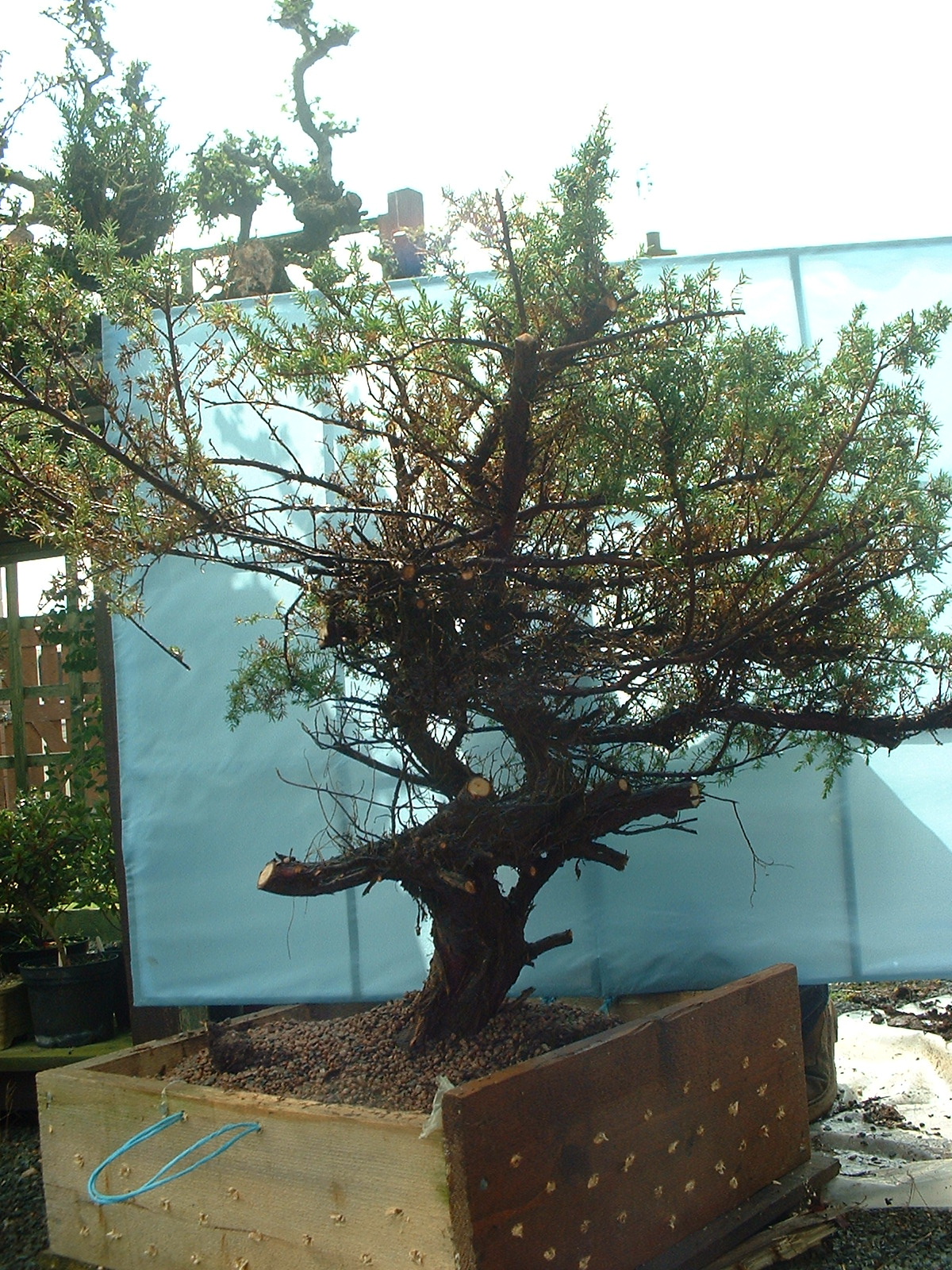